How To Record Guitar

How To Record Guitar

How Can I Record My Guitar At Home?

In today’s video, Jim reviewed “How to Record My Guitar?” This is a topic that many people have some misunderstandings that there is only one way to record your guitar at home. We took a video and put together a little of information to help newbies understand How To Record Guitar at home. We transcribed some text below, it is a bit rough in the translation. You can watch the full video below.

How To Record Guitar on a PC Computer, Laptop

I know it’s been long overdue. I haven’t done a video in ages and I have no excuse other than lack of time, and I haven’t even had time to pick up a bloody guitar in a couple of months, as you can tell. But so I’m going to start out by kind of showing this thing off. This is a GNG so let’s review Giulio Negrini Guitars.

Giulio is out of Switzerland and met them a number of years ago. This is my fourth guitar from Giulio and this is the model BREA model. And it’s kind of my design and his magic, the solar system. So, of course, we have the sun and all the planets in order all the way up to. Yeah, Pluto’s in there. Sorry, it’s still a planet for me. It may be a dwarf planet, so. Yeah. Neat stuff. You know he is an absolute magician.

I’ll talk about him in a moment. Let me just tell you about the rest of the guitar. So we have an old top here that is a very, very, very old and expensive piece of wood. I’m running a Floyd Rose original gold. Obviously, the fretboard is ebony, black ebony.

Oh, goodness gracious. The back to the guitar, I believe, is mahogany, and yes, that’s off intentionally because we can. We can tell electronics, batteries and all explain the battery in a second. This is, 4 bolt as you can see, the gorgeous roasted flame neck, man and it’s stunning, very, very, very nice. So electronic wise kind of give you the two cents here. 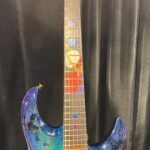 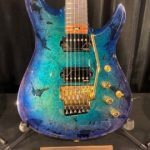 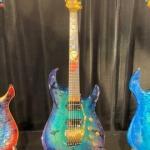 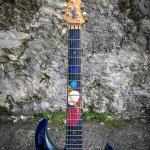 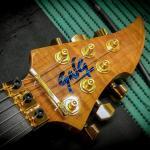 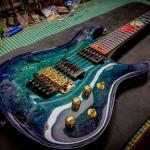 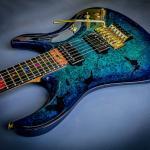 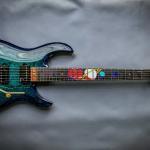 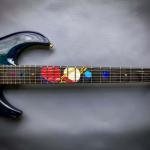 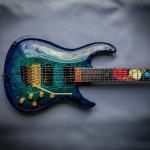 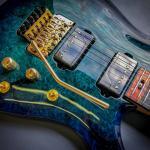 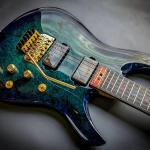 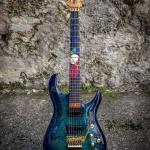 These are the Fishman Fluence, Devin Townsend, signature pickups here. I like “DEV” (Devon Townsend if you haven’t heard him check him out here). He is a great guy. So basic three-way meeting this pick up both pickups and in this pickup that this is actually it’s for the Fishman system and volume. This is the tone. And then this guy is an Afterburner. So the hell is your show here? So with everything off, which is the way I was playing in the beginning.

It’s OK, you know, sustain, it’s all right, get this guy in, and you can add up to 20 Db of boost. So I’m going to go about halfway here. You can see you’re adding sustain on to it, so I’m not a guy that that has distortion pedals, I just don’t use them period. To me, either the amp delivers, and the guitar delivers or, you know, go home, go big or go home. So that’s just me, whatever. Everybody’s different. So instead of a pedal, you know, I wanted to. I just want a clean boost. And if I ever use a pedal, it’s usually just a clean, like the MASA, whatever the hell it is that I use on rare occasions. But yeah, this thing works outstanding. I’m so. Yeah. So that’s the guitar.

So Gulio again is out of originally out of Italy, and he moved the shop over to Switzerland a few years back. The man he’s just absolutely amazing at that building and the feel and the quality. I mean, he’s truly an artisan and you know. I just I can’t say enough about his talent and work quality, not to mention he’s a hell of a nice guy too.  When you get an instrument from him, you know, it’s not the cheapest thing in the world, but as you could see, it’s you know, it’s a piece of artwork, but it’s very playable and sounds amazing. So, you know, if you want one of those guitars for life kind of thing, this is definitely it. Check out his website, www.negriniguitars.com.

So let me talk about one other thing, which is the amplifier, as this is running through at the moment. The BRBS  100 Deluxe. So Doug Rapoport and I had the same mods done to this amp. Sebastiano Barbirato was the mastermind behind BRBS and this is the second amp that he’s built for me and my God. The tone, the tone from heck. You know, I’m trying to keep the nasty words at a low roar for me. Not always easy.

So, the 100 Deluxe is really the Modded Marshall, right? And I’m not a big Marshall guy. I really don’t like them at all, actually. But, you know, these modded Marshalls’, you know, like his amp and the Bogner, or the Suhr 1800. I just love them. Um, and of course, I love Engl and my MESA’s that kind of stuff, too, but it’s just a really nice full sound. You kind of get there, you know, the edge and the bite from your, you know, from the tubes, from that brit kind of sound too.

But yet it’s more mellow, it’s not as harsh.  You kind of gets these nice round edges. And I’m really talking esoteric guitar crap now. I almost said another bad word. I kept it back anyhow, so that’s the up from running through. There’s a little of effect on the amp itself and the effects loop. So really this is going to kind of carve into the DAW or Digital Audio Work Station (What Does a DAW Do?) here and some recording and you’ve got to put my bloody glasses on what happens when you get old.

So, you know, if I turn everything off right now. That’s just killer anyway, sustain for days, and that, guys, is just the guitar, so there’s no extra BS in there and I’m even running wireless. I run the Line 6  Digital Wireless, just ones I like. Um, so rack-mounted wireless first, but in any event. So, you know, if you want to really get you to know, so. So let’s talk about this, you know, recording of guitar, kind of pushing us into that topic.

Um, and I said, hey, so I. You know, the cool thing about a door in recording and digital video workstation is, is we can do all kinds of neat stuff like that, effects like, jeez, OK, well, I want some really saturated reverb. I have Altieverb 7 it’s a convolution reverb on here with a just it’s a cathedral of some sort but.

Like, the nice thing about it is, is I can record my track and I’m recording with no reverb at all, or I can record with reverb and it’s not being printed. It’s not there permanently. So, I can change that reverb whenever I want as opposed to putting verb or reverb on the guitar and once it’s recorded. Well, you got what you got. So if you want a different sounding reverb, you go to do it all over again. So I record dry nearly every time. Dry meaning I don’t have any reverb on my guitar most of the time, there are some reasons why I don’t but most of the time.  90% or more of the time it’s dry and I can add whatever I want with reverb.

So we recommend that you record it dry or as dry as you can, then you can add your effects to taste afterward. This way, as the mix starts to come together a real wet reverb or containing lots of reverb can get messy or spacy sounding. Because remember it’s about the song and the quality of the overall song, not the tone of one instrument.  The tone of the instrument will change as you add other things.

First by putting a microphone or 2 or 3 in front of the speaker, and bring it into something like my UA Apollo X8p or X16 audio interface. I would use multiple microphones on and off-axis and one in the room to catch the room, but this technique is difficult if not near impossible because you have to mark everything in the room to try to recreate the same mic technique.

The other option is running something like a BOSS WASA Amp Expander or a load box they can be resistive or reactive. Resistive meaning it takes the power output of a guitar AMP and puts it through a bunch of resistors, which absorb the power and still lets you record the audio. Great for the times you want to crank an amp way up but you don’t want any volume. Think of playing in an apartment building, but you don’t want anyone else to hear you. Reactive, on the other hand uses capacitance and resistance to capture what the speaker is doing and the cabinets. The “load box” is feeling the speaker & cabinet to give you a far more traditional guitar amplifier sound. My opinion is I like the reactive style more.

You can also record by plugging the guitar into an AXE-FX, which then the outputs of the AXE-Effect plugs into my interface for this video UA Apollo x16. The positives being that you can take a device like the AXE-FX on the road to play live, or bring it back into the studio when you need it. Once the tone is right, it just makes it very easy.

Plugging directly into an input using a plugin, amp sim, or amp simulator. It’s just like using an external box like AXE-FX or other amp modeling devices. The power of this option is that you can change the plugin and model a wide variety of amps, and the unique sounds that each of them has all inside the computer using the DAW plugins. There are so many great plugins, you can use the get the sound you are looking for.

Can I Record Guitar Without an Interface?

As you can see in the video, I show you a wide variety of options when recording. You will need an interface of some sort that takes the analog sounds of a guitar, or any other instrument and converts them into a digital signal. You pick the best interface for you, but if you still have questions, we can help. Give Slick Audio a call at 570-371-5800. We will help you get the best interface for you.