We have an updated post see Quiet Computers or Quiet PCs for music production?

Our computers which come in a wide variety of shapes, sizes, designs are made for the purpose of making the best audio possible.  Regardless of the audio, you are recording we make a Computer for your needs.

Music production computer, we got them.  Live audio recording computers, yes we got them.  Computers for recording game audio, we have them too.  Well, what about Quite laptop computers for recording my first album from my small studio apartment.   Don’t tell anyone but yes.  We have computers that you can put into a small room like your bedroom, record your first album.  You can even score a major motion film that’s sure to win the Oscar for best soundtrack in a film. 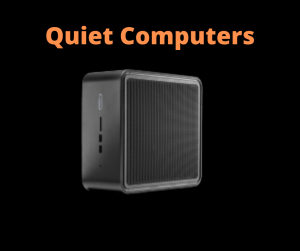 Jim gives you his thoughts on Silent PCs, Quiet PCs, and fanless computers in a recent video.  We are recording audio we want quiet PCs that is the bottom line.   So let’s talk about form factors and how they affect computer noise. 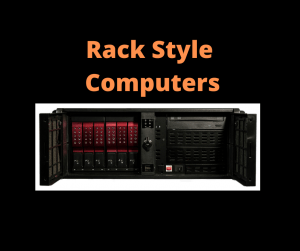 First, there are Rack computer systems that are not overly quite do for several reasons.  They are difficult to cool effectively since there’s not much room to add quiet cooling options like liquid cooling.  Also, due to the shape of the computer case can cause standing waves and odd sound reflections (Think of an acoustically tuned room).  Most studios keep these rack-style computers in equipment rooms so noise isn’t much of an issue. 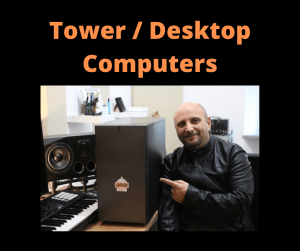 Next is tower style computers, think PC or desktop computer.   In our opinion, they are really the best option for several reasons.

As some fan noise is to be expected, running a computer at almost 100% CPU utilization will cause the fans to struggle to keep the computer cool and will run load and fast.  Do not do this because computers running too hot and improperly cooled will fail.

Laptops and Tablet Computers for recording 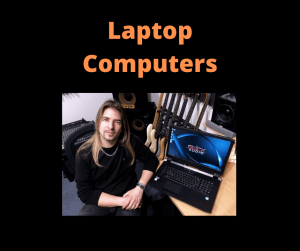 We offer multiple types of laptops.  First a traditional style, a small thin light mobile laptop.  Running CPUs are designed to get the best battery life and are meant to record like 30 -50 tracks with some plugins.  The person who would use a DAW computer like this would be someone who records live sound like maybe a band at a gig or personal need with small track counts.

The second would be desktop replacement computers running the same CPU and graphics card that would be in a desktop computer (meaning they are mobile but replace the need for a desktop computer).   They have very fast CPUs, bigger screens, more power and can be a bit larger in sizes like 14, 15, or 17 inches in size.   These larger laptops can if they are running full utilization can get a bit noisy, because of the fans cooling off these larger, more powerful components.  This is to be expected when putting all that power in the small size of a laptop computer. 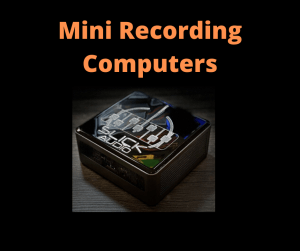 We also have a line of small size computers.  These computers are designed to be used in areas that are limited in space but still need to run DAW software.  Think of tour buses, hotel rooms, etc.  Anywhere you want to have a computer but don’t have the space to put one or the need for a laptop or desktop computer.

We offer multiple models with a few outputs all the way through a lot of input and outputs like our M570, M580 audio recording computers.   They are smaller, quiet, and great for the tour bus or bedroom audio recording or working on small projects.