WHO NEEDS AN AUDIO RECORDING COMPUTER?

Loving the Slick laptop thus far. Runs perfectly and I don’t have to think about it. I dove right into an album mix project on it, and so far, not once, have I had to think about the computer. I can’t imagine any higher praise than that. 🙂

There were no interruptions to the workflow 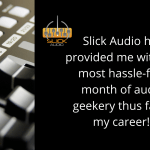 Until recently, I’d always used cheap windows machines for audio production, making do with whatever I could afford at the time. I did my best to keep them tweaked out and operational for audio production. Finally, after a simple hard drive failure with a new gaming-style laptop from one of the large computer companies caused me 4 months of downtime, something snapped.

For the first time in my life, I considered buying an Apple machine. I was always a bit envious of the limited architecture of the Macintosh world since it was easier to make specialized audio gear Just Work with the platform. But from what I can tell, Mac-using audio geeks are less happy now with that platform than at any time in my memory, so I was wary.

But then I found Slick Audio. These are premium machines, costing much less than a similar performance from the Mac world, and are already tweaked out and dedicated to audio. It was more than I’d ever spent on a laptop, but I bit the bullet, braced for impact, and ordered one.

The first night I had it, I installed the audio software I needed (drivers for my interface & control surface, the two DAWs I use, and the plugins I like). I copied over some data that I work with onto the new machine.

And then I got back to work.

I just finished mixing the first record on this machine, and through the entire process, I didn’t have to think about anything computer-related at all. Not once. Everything—both primary DAWs, all of my plugins, the audio drivers—just worked, I never got a hiccup, a glitch in playback while the computer catches up, I never had to reboot in the middle of the session because the computer’s “acting weird.” There were no interruptions to the workflow to fight with technology. It was just about the music, every moment, from initial balancing to see what I have in each song to the final renders (which took less time than ever….. did I mention this machine is fast?).

I can’t imagine any higher praise than this. If you have the option to invest in quality tools for audio geek jobs, Slick audio has provided me the most hassle-free month of audio geekery thus far in my career. I expect this machine to last me years. Highly recommended.

The Main Core of My Studio 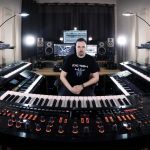 Two months ago this monster PC by Slick Audio became the main core of my studio. Jim Slick, President/CEO of this company was extremely kind to send me their flagship model, the T4100 (a bit customized to fit my needs). I wanted to test it very carefully before giving an honest opinion about it.

I did my best trying to stress this PC in every fu**ing way (both with audio and video applications) to push it to its limits… I’ve poorly failed! Every time it’s like it’s telling me: “Come on! That’s all you’ve got??”

The secret behind this powerful pc is not only related to the high-quality components inside it (which of course play their part) but the way the operating system was perfectly configured and optimized for audio and video applications. I’m extremely impressed, really.

Feel free to check the following video made by Jim himself where he explains what the T4100 can really do: https://www.youtube.com/watch?v=YZo2cvxbPhA

Jim is a very down to earth guy and extremely helpful to answer all your questions about the audio/video PC world and more. Feel free to get in touch with him.

Last but not least he is a hard rock Icefish fan… what could I ask for more? 🙂

Jim, thanks a billion again for wanting to support me and Icefish. YOU ARE THE MAN! 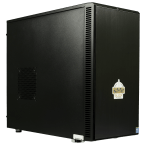 … as a Slick Computer client and the beneficiary of this kind of excellent advice & attention that Jim Slick can and does give during the “shopping” process, I can attest to the value of this approach to determining your audio computer needs. I would also suggest you pay the few extra few hundred bucks and buy your machine from an audio expert like Slick Audio. (No you won’t get free delivery.) But, if you put a dollar value on your time ($/hr) my experience is that you will more than make your money back just in the setup time alone, never mind if you run into “problems”. Personally, I have bought gaming machines, CAD machines, windows server other powerful workstations, and while they all worked decently (eventually) not one of them was developed to be “Pro Audio specific” and consequently my Slick Audio machine is capable of producing some of the most professional sounding tracks I have written this side of the (million-dollar) analog studios I spent the majority of my career in. I recommend taking Jim’s advice and seriously considering purchasing one of Slick Audio’s machine. Good notes and Peace!! 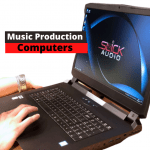 I’m very happy with the Slick Audio computer. It’s so responsive compared to the old one that it has added a whole new dimension to my workflow of efficiency and inspiration. I also notice that the sound quality of the mixes has improved, something I didn’t think possible as it should not be dependent on the computer hardware, however slow. But there it is. When I hear a mix it has new transparency, richness, and detail that greatly influence how I interact with it and the decisions I make regarding how each part of the mix fits together. Thank you for putting together this magical beast that has and will transform my effectiveness of listening and working!