I’m going to preface this by saying I’m not getting every brand in every interface in here I don’t have until tomorrow afternoon hour, or twenty-five-hour video so let’s just keep this real simple and short now I’m going to stick to two general types and brands and that sort of thing in the general specification is by no means supposed to be a comprehensive list but it is a start for those of you who are beginners.  If you’re not a beginner and you have some expert opinion on this keep it to your bloody self-thank you so let’s talk about what we should be talking about and that is inexpensive interfaces.

There are several different types of audio interfaces.  Let’s go over the types of interfaces again.  First, there is the USB Audio Interface, which is probably the most prominent and generally the least expensive of the bunch. It’s it is the slowest of the bunch but there are a few exceptions to that rule but let’s shelve that for a minute.  Because USB has really taken on a whole different world since the last video that I did about this topic a year or two ago.

Firewire Audio Interfaces, this was a one-time popular protocol, but now it has been dead for years so just stay away from it.  Not to mention good luck finding a laptop that has Firewire port on it.

We are going to start with USB Audio Interface for this discussion.  Let’s talk about some general brands you know we have Focusrite of course, which makes their Scarlet Audio Interfaces.  They start at a little over a hundred bucks, and man they’re great interfaces with a bunch of features and other models to offer with a price going up depending on the additional features they offer.

Before we go back to other USB interfaces let’s talk more about the USB available in the USB Audio Interfaces for a moment.  The cheaper one is going to be the USB 2.0 there are a bunch available  I’ll give you a few examples below.   There is also USB 3.0 and USB-C, PreSonus has a line of USB – C.   PreSonus makes Studio 192, which is a USB 3.9 interface which is pretty impressive in its own right.  We are surely going to start seeing more and more USB – C interfaces.   This is an interesting alternative to Thunderbolt kike the PreSonus1824C.  Which is roughly $500.00, but if your computer has USB-C then this interface would be a great option for you.  PreSonus also makes less expensive options such as the 1810c.

Some of the other makers of audio interfaces include Tascam, and Apogee.  Apogee which was strictly Apple is now offering Windows compatible audio interfaces like the Jam96k.  Apogee makes a series of Windows interfaces now in the USB world they also offer some thunderbolt interfaces.   Steinberg Audio Interfaces, who can forget Steinberg I mean they have the new ones guys with the new Rupert Neve Audio Pre’s in them.  If you haven’t seen them yet they’re freaking brutal, absolutely brutal and very, very, very low cost.   M Audio is a great organization and has a good product with some low-cost options for audio interfaces.  Previously mentioned PreSonus, they have a great interface and I need to mention them again.  What you get from PreSonus for the price is incredible.  They give you a lite version on Studio One DAW.  Which is, a fantastic program not to mention VI’s or Virtual Instruments I’m just like WOW for the value.

Not Cheap but Incredible.

The following does not fall into the cheap category. But needs to be mentioned before returning to the other less expensive options.

A company that I want to mention is RME.  They have really impressed the daylights out of me.  Some of the Slick Audio endorses are RME endorses.  Like Alex Argento, and I’ll tell you what they are doing some magic with USB 2.0.  They have really baked some magic into their product the whole chipset, drivers, and the way it interfaces with the computer they are amazing.  Now they are not the most inexpensive, they carry a price tag.  They start at like $500.00 and they are worth every penny.

We need to mention Antelope Audio, this is one of the newest pieces of gear we added to the studio in the office and it’s just incredible.  They have interfaces like the Goliath, which is one of the most incredible interfaces I have ever used.  It’s fast, easy to use, sounds great, and honestly is a joy to use.

Let’s now shuttle over just for a moment and talk about Thunderbolt.  Thunderbolt Interfaces there are a couple of cheaper ones out there, but for all intents and purposes.  We’re talking about Universal Audio,  Apogee,  Mark of the Unicorn  “MOTU”,  Focusrite and PreSonus.  These companies, for the most part, are going to be the biggest ones.  I mean there are some other ones out there like Slates got one out now, and you know Lynx has some models out.  But we’re getting into some big dollar items.  You can get some of the cheaper ones like Zoom, but I wouldn’t recommend it, just stay away.   So in the Thunderbolt Audio Interfaces, generally we are looking at the $500.00 and up prices.

If Thunderbolt is More Expensive Why Would I want it?

So let’s talk about why would you want A Thunderbolt Audio Interface over you generically a USB interface. First Thunderbolt writes directly to RAM and does not need to process and I’m keeping this very generic and very simple.  So electrical engineers out there if you really want to talk to you about this from an engineer’s point of view just pick up the phone and call me.  I’ll be glad to but for right now let’s just keep it simple because this is for the noobs.  It’s not for the electrical engineers of the world of the experts in audio. It’s for folks that are looking for guidance.   If you want to have a Thunderbolt interface then,  you need to realize we’re starting about 500 bucks.  Because you’re talking about a device which, can write directly to memory.   As opposed to having to use the CPU exclusively to make every single write.  Why would that matter?  Well think about it you know you’re freeing up your CPU quite a bit to do to-do the other stuff.  “Stuff” it’s a technical term, and the end result is the end you end up usually with a better product overall.  Now again that’s not an end-all-be-all it is a generic rule of thumb.  So you know like a Universal Audio interface, why would you want to use a UA interface.   UA has its own suite of plugins and the Universal Audio Apollo devices have DSP built onboard.  So, and those plugins only work with their DSP and the cool thing about it is you know with DSP digital signal processing.  It runs the plug-in as opposed to letting your CPU run the plug-in.  Therefore, freeing up your CPU for other stuff a technical term again.

So, you know there’s merit for that. I mean I know when I’m doing vocal tracks, I want to hear some reverb and some delay in my voice.  You know the more of that stuff more technical that you put in your DAW and try to run it through as a true plug-in.  Non-DSP plug-in increases latency it just does overall.

This is where the sizzle or interesting tech from makers like UA, MOTU, and RME comes in.  They developed an application and hardware designed to give you this kind of near-zero latency. I’ll call it like a mixed bus, it’s a shell so think of it as a DAW (Digital Audio Workstation).  Before you get to your DAW and it’s basically, a mixer that is hardware driven.  A by using it you can do what’s called latency-free monitoring.  Again, there’s no such thing as No Latency. Latency Free is just extremely low inaudible latency would that be the probably more proper term.  The reality of it is you’re just going through the device.  The devices you know putting the plugin itself and it’s running it right on the device and then you can monitor it.  And sing and do your magic and have fun you end up with you know a near-perfect scenario.  So that this is the way that a lot of these companies are doing work-around.  So you know again generically don’t hold me every single name.  MOTU is doing that RME does that way for their interfaces all of them.  Universal Audio obviously does that just in a slightly different way.

To recap we have USB, which are going to be the least expensive interfaces. If you want to stick with a company like RME specifically.  They are going to give you a lot of bang for your buck.  But they start at that $500.00 price point. So not cheap or overly inexpensive but very good devices. Remember you get what you pay for.  This does not mean the other interfaces are bad they all have some great products, and some have great USB products.

We touched on Audio Over Ethernet briefly which I mentioned before.  This is an option, but I would not call them inexpensive, but they are great options.  Just keep in mind that AOE like Rednet is going to cost you. 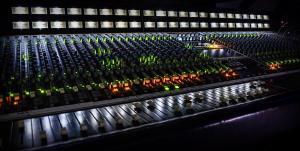 Before you build a Recording Studio.

I think an important take away is that if you are building a studio.  You need to analyze what you are building a studio for.  If you’re building it for it purely for recreation.  Set a budget first, like I want to spend ten thousand dollars in total.  Come up with a total price because there is a lot of stuff you are going to need to buy to be able to put a studio together.  Nonetheless set a budget stick to that budget so you know you can be easily taken over and over-sold.  Don’t be oversold don’t be undersold.  Get the best quality you can for your budget.  I mean that’s the whole point of trying to do this.  Remember you should be talking to an expert when you’re looking at this stuff.   But by all means, go look because you might find something.   Maybe something from say, PreSonus that tickles your tail and you have just got to have.  That’s where a technical expert like Slick Audio will help work with you to put a PC together with all the best other components like microphones, DAW software, Monitors, etc.  To be able to do all the fun creative stuff you want to do.  I promise you, you’ll have a ball.  You do not need to spend a fortune to do this.  You can do this in a very, very, very reasonable budget and a very reasonable price.  But again, reasonable to you may mean different than reasonable to me.  So, keep that in mind and it’s best to call and we can help you and if you’re interested in buying an entire package. I can certainly help you in pricing for all that “STUFF”.   Stuff being a technical term again put together.