M590 from Slick Audio PC is a Mighty Mini Monster. 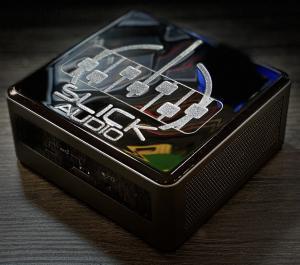 The M590 was released as a small form factor audio recording computer,  Which was designed for small spaces and to run very quietly.  Slick Audio’s original M550 was a revolutionary new design that won a lot of attention and interest. This attention was mostly from anyone looking to record quality audio but needed a computer that fits in a small area.  Since then the M550 has since been replaced with several models the newest version being the M590.  Which has the same small size, but it has the performance of a computer much larger.  This newer model means it has some new tech and components inside to make this smaller audio recording computer a real giant.

Digital Audio PC maker fills a need and produces a small but “ Mighty Mini-Monster ” with its new audio recording PC, originally the M550. (Which is now the M590 also a mighty little PC for recording audio.)

Slick Audio, the premier manufacturer of audio recording PC’s for music, video post-production, and game audio, has taken recording PC to an all-new level. “Our Mighty Mini-Monster” as CEO Jim Slick called it, the M560 (now the M590) mini Audio PC is a knockout.

The manufacturer creates a line of Windows-based PC’s designed to capture and record digital audio for a wide range of applications; from the Professional Music Industry to Hollywood, Game Design, and PC’s for the home musician. Slick Audio’s mission is to produce the best audio recording PC possible. To simply get the best sound when recording digital audio.