Collecting guitars, bass, guitar petals and other musical equipment. Can be great but here are a few thoughts Jim had about his guitar collection and what collecting guitars can become. Does anyone else collect music gear what is it?

The Good, The Bad, and Everything Else

Hey folks, Jim from Slick Audio today I’m going to talk about a very simple subject. And that subject is collecting music gear so if you’re a drummer collecting drums or pieces of cymbals.  You know well we say a gear whore in general.  I collect guitars and amps and I’m going to give you a little taste of that so here’s a word to the wise before I show you a piece of my collection  be careful starting to collect because it can become an addiction real fast and then it hits to a point where you don’t have time or the resources to be able to play.  What you bought and then they sit and you can look at the pictures of them because you don’t even have time to pull them out of the cases.

To look at them I’m gonna give you a quick case in point as I slide around this way and this would be my actually part of my guitar collection so as you could see yes I built the rack it’s not the prettiest thing in the world but I did build it because I have many freaking guitars.  And well there’s no such thing as too many guitars to guitar player so now that I’ve said that you know it just it turns into such an obsession I mean guys you’re not saying is there’s guitars behind here stuff behind here I’ve got a room in the other room that’s got multiple closets stuffed in there.   And the shame of it is we’re not talking you know cheap stupid guitars I mean here’s a music man.  Look three and two mess and signed by Steve Lukather, 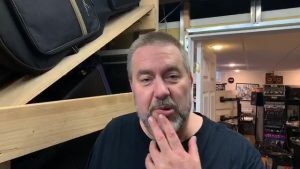 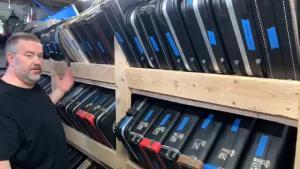 I need my freakin glasses on so I can see them a better.  it’s hard majesty of music dance is kind of like my music man there’s a blueberry, JP 15 that limited and a signed Warrior Guitar Draco.  I got an entire row is all Jackson’s all custom shops by the way.   No regular GP Jackson’s these are all custom shops.  These are my three six signature models I mean it’s just it gets insane you know.  PRS is I mean this little chunk here is Paul Reed Smith.  These are the GNG Guitars there’s an old Kramer they’re custom shops Lido Guitars collections.  Here there’s Bucks Dharma guitar the two Melancon Guitars  own guitars very beautiful.  The Jackson’s done by Grover Jackson to some my acoustics like Martin, Riversong, Taylor, Framus Guitars, Devin Townsend model.   A couple of Les Paul’s, this is an PRS to hollow body.

What I mean it just turns into total section Jackson double max there’s, Jackson’s up here because I couldn’t put them down here you just start to get to this point of Ludacris.   I would love to be able to play every one of these guitars again and have the time to do it just how I honestly into the point where it’s like you know I mean I’ll give you an example.   You know the two Knaggs Guitars here and the Doug Rapport I have yet to play.   Two massive Luke 3’s I have never played it’s in the case.  This one Taylor here semi acoustic electric and this is Keanu Reeves Custom Shop Matrix bass.   Its serial number zero, zero, zero, zero it’s like wow.   But I mean you know the shame of it is that look through here and it’s like oh man there’s a 1985 Jackson first year Jackson’s Saturn you know.  I just look at it and I just think to myself oh my GOD collecting can turn into a very dangerous thing.

So when you start the whole collecting thing it’s danger Will Robinson.  And I can tell you right now you’re gonna get to a point like this where you end up with instruments and I’m damn lucky to have them and proud to have them.   And you won’t have time to touch them so, my advice don’t start it seriously as cool as it is it’s not really cool because these instruments deserve to be played.  Consequently, I’m selling a bunch of them. Some are going to be sold and some won’t I’m not selling them all by any stretch.

I’ve got probably a dozen or so and change up for sale but you know it’s just stinks you know. I’m telling you so be very careful when you when you go your Gear Acquisition Syndrome.   So, my amplifier collection you guys saw here pre-amps or whether it’s you know interfaces whatever the problem is going to happen the same way, you’re gonna end up using one or two and that’s it pedals.

Guitar yeah there’s that’s a good point I don’t even think about that so my fetish is rockier.  Let’s step over this way a little bit so I can get the hell out of the dark room of the world but yeah, I mean pedals.  Dear God I mean think about it there’s guys you know I’m not a big floor pedal board guy.   I don’t really like use pedals my problems rack you know at one time I literally had 6 Axe Effects.   Six not one, six of them and it was like you know a couple for this rig couple for that rig.   You know and it was just like it was ludicrous I mean one you know actually did the job quite well but you know I didn’t have one I had six.   Because I might run this with that this could become stupid.   I’m down now to one Axe Effects too and I do have an Axe FX 3 and I just keep that as a standalone device.

But yeah floor pedals my god you know when you start talking you know compressors; I mean those guys are by compressors or distortion pedals that’s the classic you know this was cool that was cool Atmos I think I have three.   But there’s guys that use you know literally have dozens and dozens and dozens of just distortion pedals alone and then you have modulation pedals.  You know echo, delay flange.  I mean I’ve literally heard of people having you know four and five hundred pedals to choose from.   What the hell would you even know what to pick and use.  You know “oh there’s my new favorite of the day.” Or what’s cool that one will be tomorrow.  And oh by the way it hasn’t come out yet that’s gonna be the next day.  I mean at some point in time like this stuff like the guitars.  You’ve got to stop and say okay this guitar fits me.   This distortion pedal fits it’s my sound it’s me it’s everything that that embellishes the way I play from a comfort standpoint.  You know fits the hands fits the playing style has the tone the sound that matches with your amplifiers.  It really is a mix I mean I you know I’ve I love my guitar rig you know when I was playing out.  I was for the most part I was using a Mark Five Mesa Mark Five but there were certain guitars that hated that rig.  Sounded like crap and you know my signature model sounded great.

I use the EMG pickup I’ve kind of always been an EMG guy a and it’s a it really is just it’s a rabbit hole that it turns into a black hole.  And you will get sucked down that black hole so fast it’s pathetic.  So my words of advice is when you find your tone.  Just stop, and stick with it when you find your pre-amps that you want just stop.   Now and there’s a way to demo pre-amps and there’s a way to demo guitars so if you’re going to buy you know a new guitar my recommendation is pick your least favorite guitar that you hardly ever play.  Then sell it and help finance the new guitar and not only is that fiscally responsible.

Funny I’m the guy talking about fiscal responsibility right?  Again I feel I have abandoned most of these instruments and it’s not that I want to do.   I love them all they’re incredible guitars but there’s no freaking time to play . And you know and when I do, I’m usually picking one of my three Jackson Custom Shop signatures.   One the Purple Heart,  or theblue quilt and this is the color that actually is on their custom shop website right now is the last one that Mike Shannon made.

So I don’t even what say other than don’t go down that don’t go down the black hole.   Screw the rabbit hole to the black hole so anyways hopefully that imparts a little bit of practical help and knowledge to those of you who haven’t started collecting it.   Or maybe just started and it you know again this could play anything other than guitars as well so just be careful.

Signing off I’ll talk to y’all in a little bit Cheers be good.