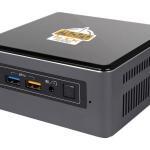 They want easy, convenient, small audio recording gear to add to an existing studio.  Or simple tools built for setting up a new recording studio in their home.

Slick Audio’s line of custom micro computers fits that need. They are just as the statement micro computer  suggests, a small 4×4 inch form factor.  Yes that is kind of small with no need to take up lots of desk space in a small office or bedroom.   While capable of recording, multiple tracks, plugins and virtual instruments.

But aren’t all computers the same?

To answer that in one word it would be NO.  There are computers that are built for all sorts of uses like gaming.  So I could use a gaming computer to record audio?  Not really, the computer would certainly be able to record the audio, but often incompatibility with the video card, or other hardware can hamper audio recording quality. Making the recording experience anything but ideal. So we would not recommend that as an option for a studio computer.  Also,  unlike gaming computers, or laptops / tablets for watching videos, or browsing the web.  Recording audio has some very specific technical needs that gaming computers or other types of computers just don’t have.  Not to mention that the software used to record audio, has requirements that those other types of computers don’t even take into consideration when they are being built.

The Slick Audio micro recording computers are specially designed to take audio, process and record it as fast as possible.  While being size and budget conscious additions to a musicians recording studio. The smaller size of these computers allows musicians, to create a small space in areas like bedrooms, RV’s or tour buses.  So they can continue to create, record, and even mix.  While at home or on the road by giving them access to a studio where they are and when they need it.  (Did we mention we do make laptops too, for those who prefer it)?

If you want to learn more about micro audio recording computers, laptops. Desktop audio recording, or computers that professionals and home recording studios use to make music.  Then contact Slick Audio or call (570) 371-5800 for help configuring the right computer for your new studio.